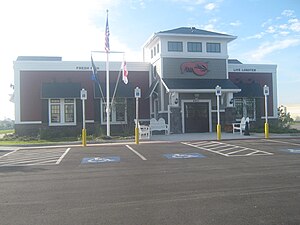 The "Bar Harbor" prototype design as seen at the Baton Rouge, Louisiana location

Red Lobster Hospitality LLC is an American casual dining restaurant chain headquartered in Orlando, Florida. The company has operations across most of the United States, as well as in China, Ecuador, Guam, Hong Kong, Japan, Malaysia, Mexico, Philippines, Puerto Rico, Qatar, and the United Arab Emirates; as of June 23, 2020, the company had 719 locations worldwide. Golden Gate Capital has been Red Lobster's parent company since it was acquired from Darden Restaurants on July 28, 2014.

Why It's First Class

8 days ago
Score 1
I KNEW they would make a wiki about restaurants!
Permalink
Retrieved from "https://firstclassrestaurantsandfoods.miraheze.org/w/index.php?title=Red_Lobster&oldid=530"
Categories:
Cookies help us deliver our services. By using our services, you agree to our use of cookies.